ROFFS™ continues its spring preview series by providing an overall update of the oceanographic conditions during early April for the east coast of the United States from the Florida Keys north to Cape Hatteras, NC including the entire offshore Gulf Stream region. As always, we have used a combination of many different data sets, but mainly sea surface temperature (SST) and ocean color/chlorophyll images. We will discuss these overall ocean conditions for the present spring season and how these conditions may translate to the near future fishing season.

For forecasting short-term oceanographic conditions related to finding fish, ROFFS™ uses real-time direct observations rather than unproven ocean models and longer-term composites. We have learned that evaluating the preseason conditions along with regional climate models provides insight into future seasonal trends for fishing. Experience and understanding the ocean – atmospheric dynamics is our guide as we have had moderate success in forecasting seasonal trends of fishing productivity based on the stepwise progression in the location of the fishes’ preferred habitat based on temperature and water color. Please reference our 2019 Bahamas forecast for more in-depth discussion on the environmental and climate indicators that goes into our detailed evaluation of the southeastern United States fishing forecasting analysis (Click Here).

Background and Some Observations for 2019

However, as of early April the Gulf Stream conditions look slightly warmer while the inshore SST looks to be similar to last year’s conditions in most places. This may suggest that the larger population of highly migratory fish species will again move from into the Bahamas area a bit sooner (perhaps 1-2 weeks dependent on weather conditions) before moving west to the Gulf Stream and then north. Additionally, we continue to see Bahamas blue marlin water being pulled northwest of Abaco. A relatively small, early push of this Bahamas blue water was observed moving towards the eastern edges of the Gulf Stream in mid-to-late March. It remains to be seen whether this current pool of blue water is able to continue moving northeastward into the Gulf Stream. Click here for the ROFFS™ review of the Bahamas conditions.

The Gulf Stream Current including its related eddies and filaments along the current’s eastern and western side are the preferred habitat of the highly migratory species for this time of year and are the most important conditions that we are studying. It is the day-to-day and hour-to-hour movements of these Gulf Stream related features that are important to monitor when deciding where to fish on a daily basis. Although we are only showing a two-to-three-day snap shot of the conditions in this report from early April (Figure 1a/b and 2a/b), we can discuss briefly the trends we see based on these early spring oceanographic conditions and related fishing reports that may provide insight into the near-future fishing season.

Figures 1a/b were derived from a variety of U.S. and European satellites during the early April (April 02-04, 2018/2019) period and Figures 2a/b were derived from U.S. SNPP VIIRS, Aqua MODIS and Terra MODIS ocean color/chlorophyll imagery during this same period (April 02-04, 2018/2019). As the exact values of the original data from different satellite sensors (VIIRS and MODIS) are not the same, we cross-calibrated the data to derive images that have realistic and consistent watercolor. This is one of the many techniques that we derived during the valuable NASA Earth Science Program projects that ROFFS™ has been involved with. We cannot over-stress the importance of NASA’s Earth Science Program for helping to understand the ocean’s dynamic ecosystem and how it impacts food security, homeland security and land-ocean interactions.

Figure 1a: This year’s Florida Keys to Cape Hatteras, NC conditions were derived from a variety of infrared sensors to get SST from NASA, NOAA, JPSS and ESA satellites during April 01-04, 2019. Main features and surface currents are labeled. 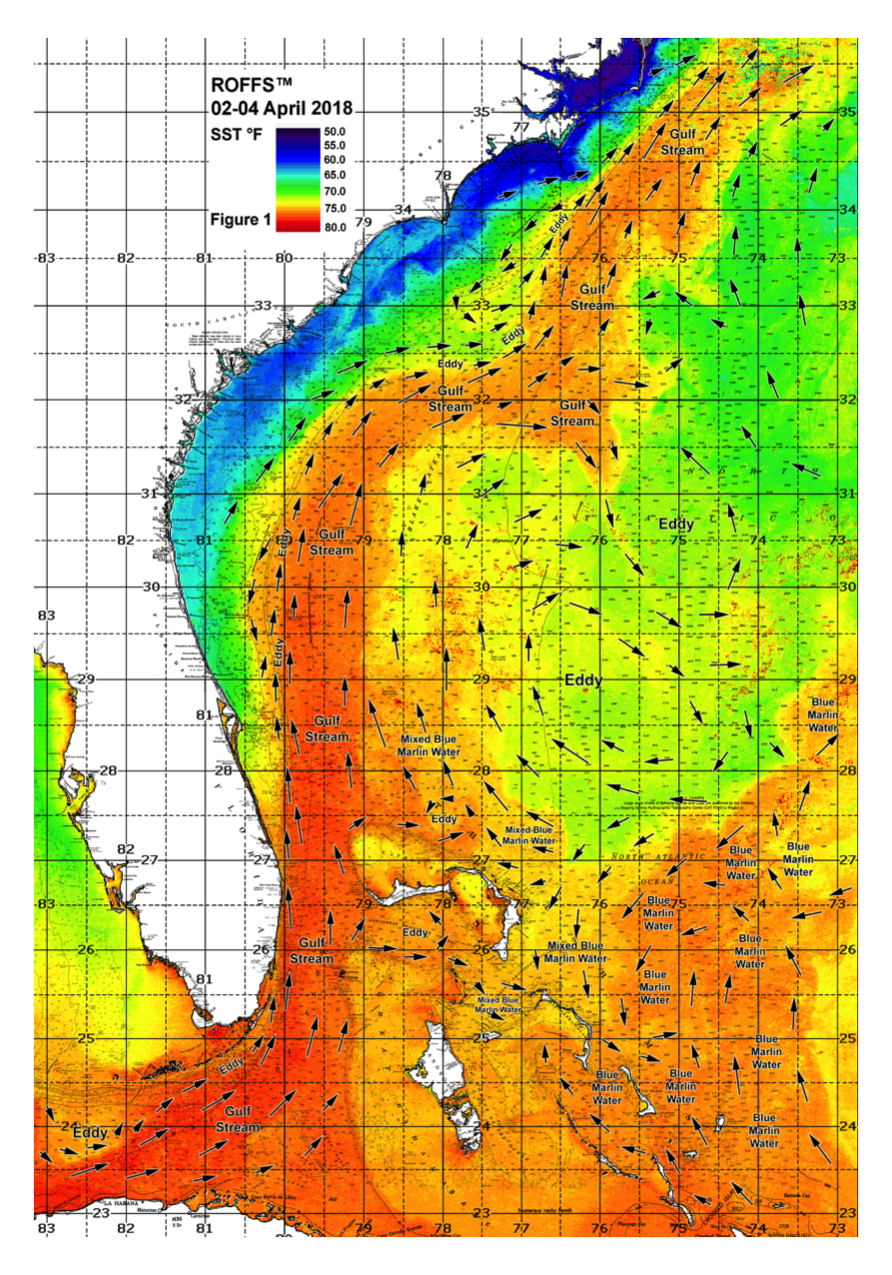 Figure 1b: Last year’s Florida Keys to Cape Hatteras, NC conditions were derived from a variety of infrared sensors to get SST from NASA, NOAA, JPSS and ESA satellites during April 02-04, 2018. Main features and surface currents are labeled. 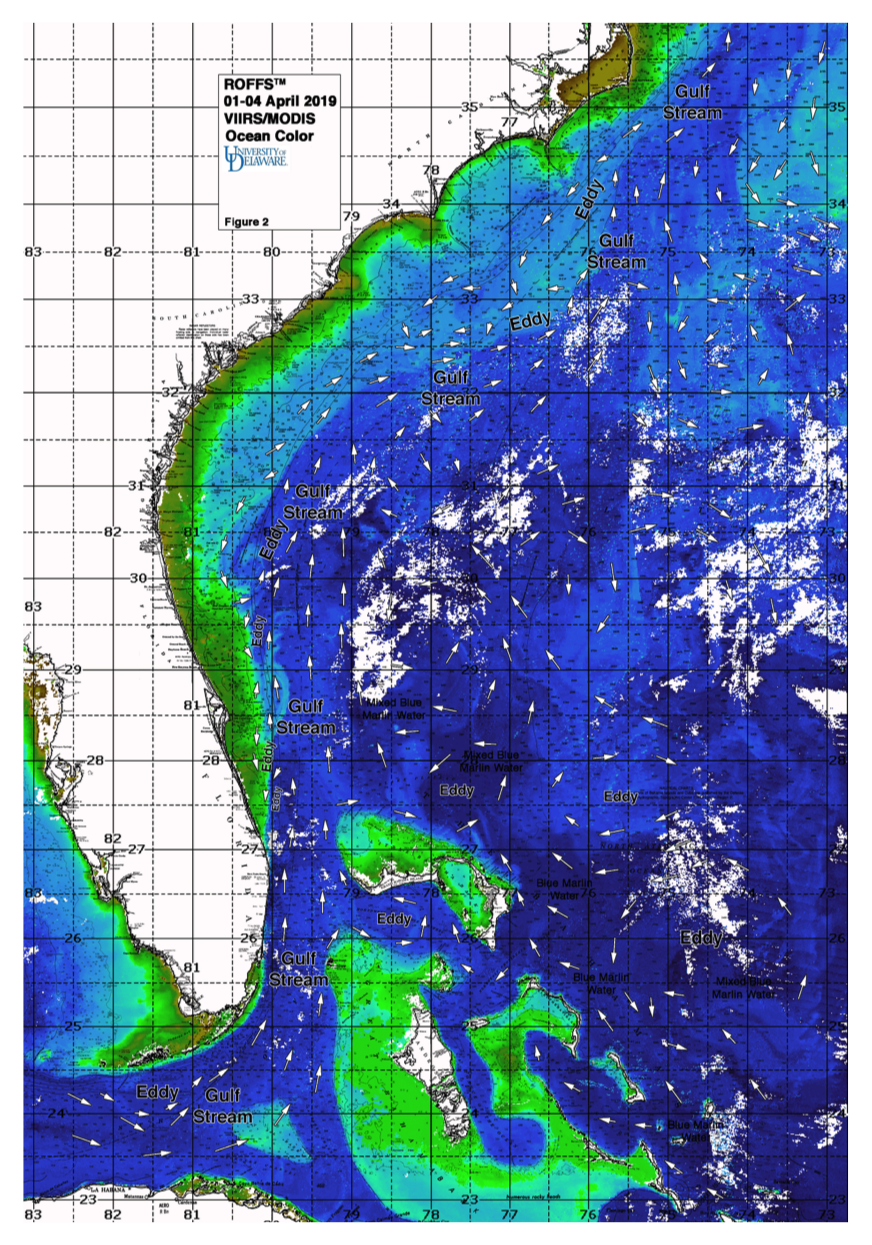 Figure 2a: This year’s Florida Keys to Cape Hatteras, NC conditions derived from the ocean color/chlorophyll imagery during April 01-04, 2019 from the VIIRS sensors on SNPP satellite in combination with the Aqua and Terra sensors on the MODIS satellite provided by University of Delaware. We consider this an image pair with the above SST Figure 1a image. Same main features and surface currents labeled. 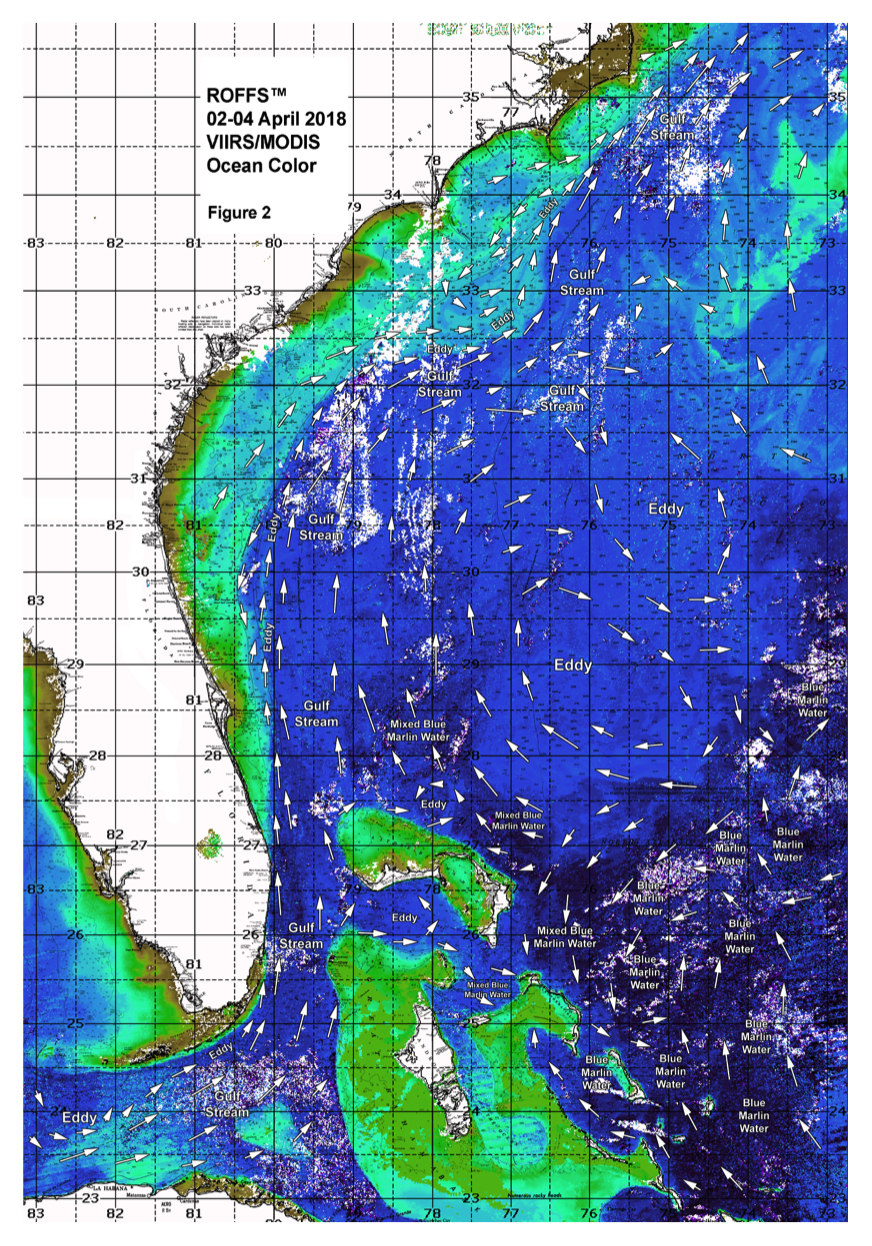 Figure 2b: Last year’s Florida Keys to Cape Hatteras, NC conditions derived from the ocean color/chlorophyll imagery during April 02-04, 2018 from the VIIRS sensors on SNPP satellite in combination with the Aqua and Terra sensors on the MODIS satellite provided by University of Delaware. We consider this an image pair with the above SST Figure 1b image. Same main features and surface currents labeled.

We could not use single and same day imagery for the SST and ocean color data due to cloud cover interference, so we used a combination of imagery and the time-tested ROFFS™ cloud reduction techniques to produce these relatively cloud-free images. However, for comparison purposes we consider these images as an equal image pair for the purposes of this discussion. The directional flow of the water was derived from our ROFFS™ sequential image analysis, following the water image to image based on the water masses distinct, i.e. signature value. An example of this years SST satellite infrared imagery in greytone can be found on the ROFFS™ YouTube™ site (Click Here). Viewing the movie will allow one to follow the flow of the water and numerous eddies within the Gulf Stream region from offshore of eastern and southern Florida to North Carolina during the last month, where the darker greytoned water represents the warmer water and white indicates clouds.

Based on what we have been observing over the last several weeks, the present overall early April ocean conditions (SST) for the Gulf Stream region between the Florida Keys to Cape Hatteras, NC appears warmer than what we had observed last year, especially east of the Gulf Stream area. However, as the air temperatures warm up over the next month, so will the SST. We have noticed many promising conditions and have received many positive fishing reports already this year. One observation is the increased number of larger Gulf Stream eddies off the coast of northern Florida, South Carolina and North Carolina compared to last year. These eddies have pushed the main western edges of the Gulf Stream further offshore (especially off of North Carolina and northern South Carolina, but at the same time pushed in warmer and bluer Gulf Stream related filament water closer inshore compared to last year. This has created favorable habitat closer to the coast for wahoo, sailfish, tuna, and mahi for limited periods of time, compared to last year. It remains to be seen if this trend of larger eddies along the western Gulf Stream edges will continue into late spring or early summer.

Despite slowing down recently, we had a good start of sailfish at the beginning of the season. However, we have also observed an increase in daytime swordfish action off South Florida. Additionally, reports have also come in of heavy wahoo action off of the Carolinas as well as strong dolphin action along south and central Florida. This means you should be either fishing already or your boat should be in the water waiting for that weather window. We want you to take advantage of the good ocean conditions and the early fishing season. Once the water continues to warm after the last of the seasonal cool fronts pass through, the offshore fishing season will have begun over most of the areas from Cape Canaveral to Cape Hatteras. It will not be long until the main migration of marlin, yellowfin tuna and mahi will be available off of North and South Carolina.

It is important to note that good fishing action on a daily basis is strongly linked to local, short-term (days) current conditions that concentrate the fish once the preferred habitats of the fish are in a particular region. When the water mass boundaries associated with these currents are geographically stable and favorable, i.e., persistently pushing over “good” bottom topography and/or in a favorable inshore direction, then they concentrate the baitfish and larger fish can be found foraging. This indicates that the fishing action on any given day is controlled by relatively short-term (hourly to daily) and relatively small-scale (1-5 mile) movements of the currents and their associated water mass boundaries. Our experience indicates that to reliably forecast specific concentrations of fish on a daily basis one must evaluate the ocean conditions on these scales. Relatively small subtle changes in the currents and their associated water mass boundary zones often have dramatic effects on the distribution and concentration of fish.

The Gulf Stream conditions change rapidly so it becomes even more important to contact ROFFS™ (321.723.5759 / fish7@roffs.com / www.roffs.com) for the daily up-to-date detailed fishing forecasting analyses and get the inside track to where the better conditions will be tomorrow. We continue to monitor the coastal southeastern U.S. Ocean conditions especially the Gulf Stream and its related eddy features and how it relates to the local fishing environment as the larger recreational and tournament fishing season approaches. Get out and fish now and maximize your fishing experience by using ROFFS™ to locate the good spring conditions near you.

Conditions appear to have declined a bit offshore

ROFFS™ client Jim Hoddinott on the Papa Pez with

ROFFS™ client Tyler Ford on the Model T out of L