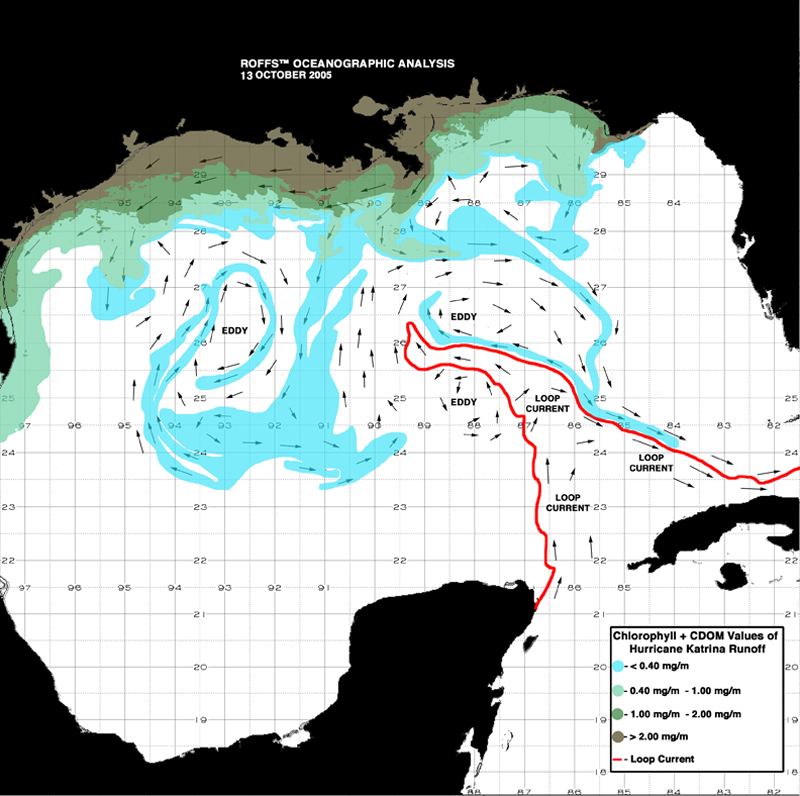 October 13, 2005 will be our last day of posting our oceanographic analyses of the coastal runoff originating from Hurricane Katrina and Hurricane Rita. One of the main reason’s we did this work originally was because of the potential threat of toxic waters being spread around the Gulf especially toward the Florida Keys. From the limited results that we have seen or are aware of, it does not appears that this water poses an immediate problem to the health and safety of humans and the majority of marine organisms in the Gulf of Mexico, except perhaps west of the Florida panhandle in the nearshore waters of the coastline.

The water with its relatively strong chlorophyll+CDOM, RGB, and sea surface temperature signature presented a nice tracer of the movement of coastal water in the Gulf of Mexico after the hurricane events. This project demonstrated our ability to provide such information to government decision makers, the media, and to the public. It provided, yet another example of how the oceanographers from industry can partner with academia and government to provide useful and needed information.

We thank our partners (Schaudt.US, NOAA_AOML, USF_IMaRS, UM_RSMAS) for their data, cooperation and interactions. We enjoyed integrating the satellite data derived from NASA and NOAA satellites, NOAA drifting buoys, as well as, oil and gas industry, and TABS current meters. But without funding we can not afford to do many fun things at this time. We will continue to collect the data and will continue to monitor the water for other reasons (fish & oil/gas industry and NASA funded work), but we will not provide a detailed analysis for public distribution on our website (www.roffs.com)

We are capable of continuing our efforts, including higher resolution analyses in the coastal areas for longer term ecosystem issues (freshwater input, turbidity – sediment effects, nutrient input, distribution changes in organisms, food chain dynamics, red tide, etc), but without funding we will not continue. 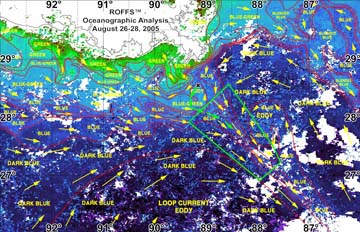 When Viewing These Analyses

10/10/2005 – We have an interesting report from sport fishermen from Ft. Walton Beach area in that the boats going offshore southwest were in the obviously different green water (turbid and distinctly different hue) than the boats that went south/southeast (clear green). This is the water we have been monitoring. Some dead fish (“small baitfish”) were reported from areas over 300 feet depths in the waters southwest, but not southeast. It was not known if this was due to the Katrina water or due to the red tide that perhaps was pushed offshore by the winds recently. I do not have exact locations, but could probably get them if needed. Apparently there is an abundance of sandbar sharks in the cleaner (300 feet also) of water south/south east. The angler stated “thousands of them in the four to six foot range.” The catch rates for all species (grouper, kingfish, sharks) in the “distinctly green water southwest” were poor, while the catch rates in the water south/southeast were very good including sharks. Stomachs (non-sharks) were either empty and/or reduced in size in these fish suggesting a lack of food. Most of the under-sized fish that were released, were immediately eaten by the sharks. Fishing effort from the panhandle has been reduced due to the lack of fuel (several weeks now), cost of fuel (now that it is available) and winds.

10/10/2005 – We have received reports that the debris field from Hurricane Katrina is as far southwest as the “Big Southern” area offshore of Aransas Pass, TX.